Today, I was looking to rebrand the KDE desktop with my own flair.  I read this very good tutorial at techbase.kde.org.  However, there were a few subtleties that I found it lacking with regard to editing the brand.svg file, as well as any other icon in a theme’s library.

Theme data can be found in one of two key directories:

There are a couple other files that can be found here and there (for example, Ubuntu declares their own default branding for the Air theme in /usr/share/kubuntu-default-settings/kde4-profile/default/share/apps/desktoptheme/) but most themes reside in one of those two directories above.

To create one’s own theme, I recommend finding something close to what you want to create in KDE’s theme library, then access its files in one of the directories above.  Virtually all of the theme’s graphics are contained in some sort of .svg file.

The particular element that I wanted to edit is the little bit of branding in the upper right-hand corner of the application launcher menu as depicted below.  However this procedure applies to just about all aesthetic edits in the theme. 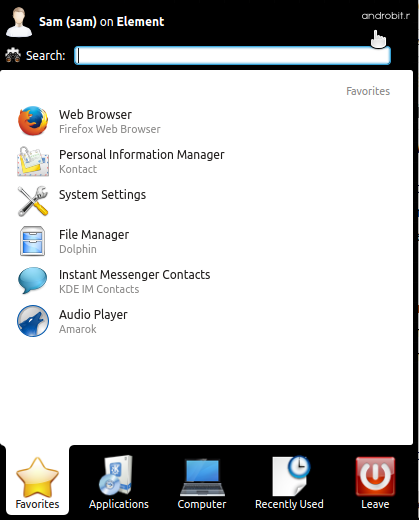 Now the particular theme that I happened to be editing was called “Androbit.”  But this principle should work for all themes (maybe with some minor variation).